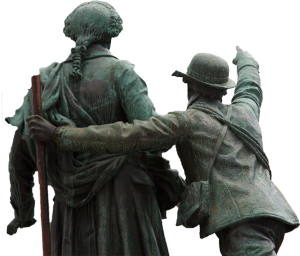 The Tour de Mont Blanc follows some ancient paths which have been used for many centuries. You will be walking in the footsteps of Roman soldiers and Celtic tribes who used the Col Du Bonhomme as a trade route. In fact, as you walk up the valley towards the Col you are following an old Roman road and cross a Roman Built Bridge in the forest near Chalet de Nant Borrant. The Tour de Mont Blanc trails began as Sheperd’s paths used to move herds between valleys and for trade between the populations scattered through the valleys of the region.

The Tour De Mont Blanc as we know it now was first attempted in 1767 by Horace Benedict de Saussure and companions. This was the same intrepid individual who put up a reward for the first person to climb Mont Blanc itself – the reward was claimed in 1786 by two Chamonix men and Saussure himself claimed the third ascent of the mountain.

This was an era when the cultural attitudes towards the mountains themselves underwent a great change. They had historically been viewed with fear and trepidation – they were dangerous places full of the uncontrollable forces of nature and commonly believed to be home to demons and evil spirits who’d interfere with a traveler’s journey – they were to be avoided at all costs. 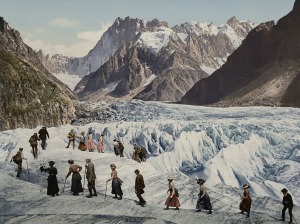 Then in the late 18th and early 19th centuries, the mountains underwent a renaissance and intrepid explorers and climbers ventured in increasing numbers into the mountains. the first ascent of Mont Blanc by a woman, Marie Paradis, was made in 1808  – remarkable considering the restrictive attitudes of society then! The 19th Century became known as the Golden age of mountaineering and many more routes around the Mont Blanc massif were attempted and opened.  In addition to mountaineers, the number of visitors to Chamonix increased steadily; but until around 1870, when an improved road was opened from Geneva, it remained an exclusive resort for rich Victorians.

The first luxury hotel was built in 1816 (The Hotel de l’Union), followed by many more. In 1821, ‘La Compagnie des Guides’ was created following an accident on Mt.Blanc and remains the core association of guides ever since. Until the end of the 19th century, mountain guides were the main economic power in Chamonix.

However, from the beginning of the 20th century with the construction of numerous hotels, hoteliers become the predominant economic power in the valley. Waling paths such as the Grand Balcon Sud were built for walkers in the late 19th century and Chamonix was the undisputed headquarters for lovers of mountains – it arguably retains the title of the world’s best Adventure sports capital to this day ( sorry Queenstown!).
In 1860 a carriage road was built joining Geneva to Chamonix via Sallanches.
In July 1901, the railway line that passes through the Chamonix valley was inaugurated. This opened the town to winter visitors and Chamonix’s fame and popularity grew. In 1924 the town became the site for the first ever Winter Olympic games. Starting from 1908 the first mountain railway was built and in the years afterward more followed with the Aiguilles Du Midi cable car built in 1955. 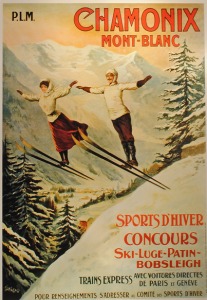 In the 1960s and ’70s, Alpine walking became increasingly popular and the advent of mass ownership of the motor car made areas ever more accessible. The old refuges which had dated back to the 19th century were updated and expanded to cope with the new influx and more hotels were opened in the valleys to meet the demand.